Conclusions: A strong impact of culture was demonstrated using the suicide rates over half a century of 22 countries, the suicide rates over 5 years of 5 ethnic groups living in US, and the male to female ratios of 6 countries. We will not be able to eradicate painful predicaments from the world. If we wish to reduce our suicide rate we need to change any aspect of our culture which encourages that ‘solution’.

Since the 19th century (Wade (1879), it has been widely held that at least 90% of suicide is caused by mental disorder. This belief has been discredited, but remains the dominant force in the field (Hjelmeland and Knizek, 2017).

The role of culture in suicide has been neglected. Culture is the beliefs, values and behaviour of people with a common background living in a designated region. It has been described as consisting “of whatever it is one has to know or believe in order to operate in a manner acceptable to” members of the community (Goodenough, 1957, p167). Culture profoundly influences behaviour – culturally appropriate responses to circumstances are termed customs (although some academics prefer the term traditions). The father of modern anthropology, Franz Boas, stated that “the behaviour of an individual is determined…by his ancestry and his cultural environment” (Boas 1945, p 27).

In this paper we will use epidemiology to support our belief. Wherever possible, we present data of half a century periods.

We compared suicide rates between various countries. To minimise variations due to definition, collection and collation of data attempts were made to seek data already published from countries forming or belonging to and conforming to agreed standards such as OECD. Comparison of suicide rates in this way makes any differentials in mortality rates between countries more country/culture specific.

Almost all the countries discussed are members of or have applied for membership of the OECD, an organization dedicated to co-operation and development. Other data came from the Center for Disease Control and Prevention in the US, the UK which produces high quality information, and a prize-winning author (Steven Pinker).

Figure 1. We present data on the homicide rate in the US, UK and Canada, over a quarter of a century (Pinker, 2012). This graph demonstrates a homicide rate in the US, three times higher than the UK. It cannot be argued that this difference is due to different rates of mental illness or differences in data collection. The difference in these rates are culturally determined. The higher availability of guns in the US no doubt plays a part, but the availability of guns is also a feature of that culture. 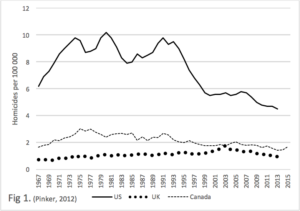 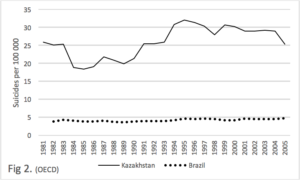 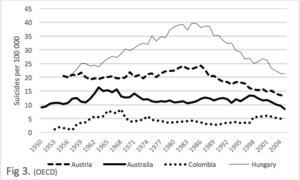 Figure 4. We consider the rates of US, UK, Italy and Guatemala – forover half a century in the case of the first four mentioned, and 4 decades for the last (OECD, 2013). There is a 2 to 4 fold difference in the rates of US and Guatemala. The most recent WHO figures for the US was 12.1, and for Guatamala, 3.6, Thus the relative positions remain the same. 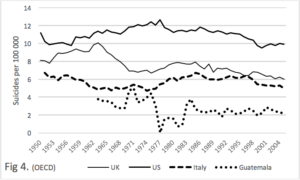 Figure 5. We consider the rates of Sweden, Netherlands, Spain and Greece, for over half a century in the case of the first three, and 4 decades in the case of the last. There are no intersections, the rate of Sweden is at all times, 3 to 4 fold greater than that of Greece. The most recent WHO figures give the rate of Sweden as 11.1 and that of Greece as 3.8, thus, the relative relationship is roughly maintained. 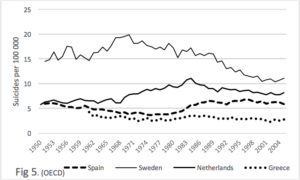 Figure 6. We consider the raes of suicide in Finland, France, Canada and Mexico over half a century. There are no interconnections. The rate of Finland is at all times 2 to 4 times greater than the rate of Mexico. The most recent WHO figures for Finalnd is 14.8 and for Mexico, 6.8, thus, the relative position is roughly maintained. 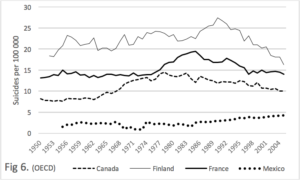 Figure 7. Claims are made that the suicide rates around the world are declining. Perousal of the above graphs may give that sense. However, we know that the rate in the US is rising (Reidenberg and Berman, 2016).

The latest WHO figures show that relative to 2005 graph points (the most recent we have), Denmark has risen slightly to 10.6, Ireland has remained about the same at 11.0, New Zealand has fallen slightly to 9.6, and South Korea has risen dramatically to 28.9, and now has the second highest rate in the world.

While it is possible to find many examples of countries which have reatively stable suicide rates, predicting the future remains challenging. 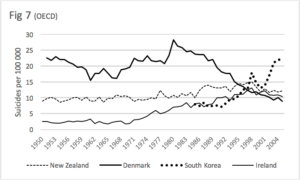 Figure 8. We consider the rates of the different ethnic groups in the US, over the period 2005-2009 (CDC, 2012). While the presented graph represents a recent 5 year period, similar results have been reported from other times. Non-Hispanic whites have a rate of 16, the Non-Hispanic Blacks, Hispanics and Asians have a rate of less than half that (all less than 8). The Indigenous people have the highest rate of all (17.5) – which is consistent with destruction of first people cultures.

This persistent difference in the suicide rates of 5 cultural groups living on the same land mass strongly demonstrates the impact of culture on suicide. 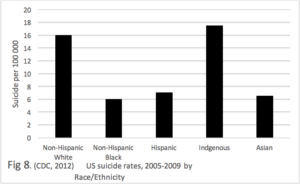 Figure 9. The rate of suicide differs by gender. We present data from the United Kingdom over 3 decades. Throughout this period the male rate has been 2 to 4 times greater than the female. Recent male to femal ratios include: Poland 6.4; Kazakhstan, 4.6; Hunguary, 3.8, and India 1.7; Singapore, 1.7 and Hong Kong, 1.8 (Varnik, 2012). These figures suggest a difference in the ratios of Europe and Asia. We see that the difference in rate by gender is sustained. While there are hormonal and other differences such as height and weight, cultural factors play a role in the frequency of this behavior. The belief that mental illness is the primary driver of suicide takes another solid blow here – depressive disorder is more frequent in females than males and would suggest the suicide rate relationship should be opposite. 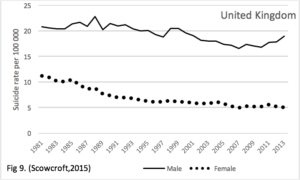 If we consider the suicide rates of three countries on the same small land mass and united in most ways (United Kingdom) we find three different suicide rates: England 11, Wales 15.5 and Scotland 16 (Scowcroft, 2015). Any difference in definition and data collection in these three countries would be minimal.

The increasing suicide rate in South Korea is a cultural effect of another form. Here, the problem is that this Asian country is rapidly becoming Westernized. Thus the old traditional culture is challenged and damaged and does not guide and support the individual as it did before. This is a well recongnized pattern, when an indigenous culture comes in contact with a dominant culture. It was labeled ‘anomie’ by Durkheim (1952). It is demonstrated by the indigenous people of Australia and the US. It is believed to be happening in Greenland, where the invasion is via the internet.

The argument that culture has a profound effect on suicide is not new. In 1897, Durkheim (1952) demonstrated different rates in 11 different European countries between 1866 and 1887. He found the relative positions remained the same and attributed this to “national temperament” (p. xlix).

Clearly, a difference exists between the suicide rates of males and females. While physiological differences may play a part, learning (culture is learned) certainly contributes to this difference.

Perhaps the strongest evidence of culture impacting on suicide rate comes from the different rates of the different cultural groups living in the US. It could be agreed that the Non-Whites lack privilage and have lower income – we might expecte these features to be associated with a high, rather than a low, suicide rate. It is doubtful that Non-Hispanic Blacks, Hispanics and Asians have less mental health problems than the Non-Hispanic Whites. The obvious conclusion is that this difference has roots in the different cultures.

When people migrate, they bring their cultures with them, thus, they frequently retain their  cultural suicide rate. There are many examples, including, Indian females who settle in the UK (Raleigh et al, 1990) and Northern European males who settle in Australia (Morrell et al, 1999). Fascinatingly, in both South Africa and the US, whites have a suicide rate around 13, while non-whites have a rate around 3 (Lester, 1989).

In addition to culture, the economy has an impact on suicide. However, the direction is not always consistent. Rivera et al (2016) found a decrease in economic growth in Spain elevated the suicide rate, while Neumayer (2004) found a recession in Germany lowered the suicide rate. Polotics may also play a part – it was asked whether the political policies of the 1980s are having an impact on the current suicide rate of Scotland (Parkinson et al, 2017). Over time, persistent change in the economic fortunes and political allegiances of a group can modify aspects of the culture.

Many people have said and written words to the effect that suicide is a solution to an unacceptable life (Seneca, 2004). We have argued previously that a range of predicaments may trigger suicide (Pridmore, 2009). We are arguing here, that when an individual is caught in a painful predicament, his/her response will be determined in large part by his/her culture. In this paper we have demonstrated large differences in the rates of suicide from different countries (cultures). It will not be possible to create a world without unpleasant predicaments. If we want to reduce the suicide rate, we need to change any aspect of our culture which encourages that ‘solution’.

Hjelmeland H, Knizek B. Suicide and mental disorders: a discourse of politics, power, and vested interests. Death Studies. In press.