Negative Outcomes of Teen Sexual Activity: Is There a Regional Effect?

A recent victory with respect to teen sexual behavior is the reduction of the national teen birth rate. In 1991, there were 61.8 births per 1000 females aged 15-19. By 2014, this rate plummeted to 24.2 births per 1000 adolescent females. Averages, however, do not reflect state-level variation. For example, in 2014, Kentucky reported 35.3 births per 1000 adolescent females, while New York reported a teen birth rates of 16.1 births per 1000 adolescent females. This report asks: are these discrepancies due to regional factors, and are these differences statistically significant? To examine rural and urban differences in outcomes of teen sexual behavior, data from two rural states (Kentucky and Tennessee) and two urban states (New York and Florida) were analyzed. The results suggest significant differences in teenage sexual behaviour outcomes between and within states. For example, whilst teenage pregnancy rates were similar in all states, abortion rates were significantly lower and birth rates were higher in rural than urban states, suggesting possible differentials in health, social, and economic policies between states.

An interesting observation from the review was that there were differentials in negative outcomes between regions, e.g. Florida, Kentucky, New York, and Tennessee. A question arises: are these differences real (statistically significant) or just random variation?

The implication is that if the regional differences are statistically significant then it suggests a number of causes which would be of interest to policy makers to identify. For example, the differentials in negative outcomes between regions may well be due to regional policies (e.g. education, social care, public health, health promotion) or regional characteristics (e.g. residential makeup, cultural variations, rurality, socio-economic).

In this paper, we examine regional differences for statistical significance in Florida, Kentucky, New York, and Tennessee.

Health statistics in four states (Florida, Kentucky, New York, and Tennessee) were extracted from a number of sources. These data are then analysed to compare and contrast teen health outcomes by region.

Negative teen health outcomes in each of the four states of interest were compared with the national average, i.e. United States as a whole. Statistical techniques employed included two-sample t-test and chi-square goodness of fit test.

Table 1. Classification of States as Rural or Urban. The Percent Rural Counties statistic for each state was calculated by dividing the number of rural counties by the total number of counties. Rural classification was assigned if the percent population living in rural areas exceeded 50%. (Note: # indicates rural states.) Sources: 1Office of Rural Health Policy; 2County Health Rankings.

Figure 1. Teen Pregnancy Rate in United States and States of Interest: 2005-2011. Displayed above are the mean teen pregnancy rates for the United States, Kentucky, Florida, New York, and Tennessee for the years 2005, 2008, 2010, and 2011. Note: “teen” refers to any young woman aged 15-19; rates for this metric are typically reported per 1,000 teens. Source: Guttmacher Institute 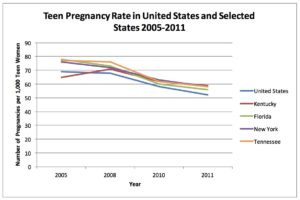 Abortion is an adverse outcome of teenage pregnancy. Quite apart from moral issues it imposes on individuals and society, abortion is a major public health concern with negative impacts on individuals’ physical and mental health and wellbeing. Trends in teenage abortion rates are shown in Figure 2.

Interestingly, rural states (KY and TN) with the highest rate of unsafe sexual behaviour as measured by the question “did not use any method to prevent pregnancy” (Table 2) appear to have the lowest rate of abortion. This suggests differences in behaviour between rural and urban states.

Differentials in behaviour and outcomes may well be influenced by political, social and religious beliefs and attitudes, health and social policies affecting access to care and so on.

Clearly, lower abortion rates will mean higher birth rates. Obviously, health and social policies that discourage prevention and abortion will have significant implications on social and economic policies at the individual and state level. For example, individuals may experience social and physical hardship coming to terms with being a teenage mother/parents, unfulfilled dreams, delayed entry into the labour market, longer dependence on the state, and so on. 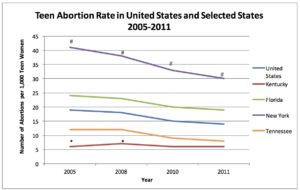 Table 3. Teen Abortion Rates: State-to-State Comparisons for 2005-2011. Displayed below are the teen abortion rates for Kentucky, New York, Florida, and Tennessee for all years of interest: 2005, 2008, 2010, and 2011. Also included are the results of the chi-square analyses conducted for state-to-state comparisons. (Note: *indicates statistically significant result of p<0.05) Source: Guttmacher Institute

Another major public health concern is sexually transmitted diseases (STD). Results suggest that rurality does not appear to influence differentials in STD rates between states.

For example, TN has the highest chlamydia and gonorrhea rate whilst FL has the highest syphilis and HIV diagnosis rate. A counterintuitive result from this study is trends for syphilis rates. These trends fluctuate more widely than trends for other STDs, and teenage syphilis rate in FL appears significantly higher than the national average and other states.

Trends for HIV diagnosis in states of NY, TN and FL are higher than the national average, with FL recording highest and KY recording lowest rates (Figure 3). 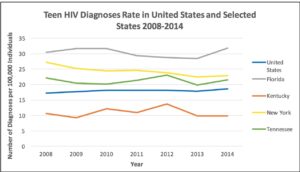 Teen sexual activity has a variety of negative outcomes with adverse health, social, and economic impacts, including pregnancy, birth, STDs, HIV, and sexual violence. The results from this study suggest significant differences in outcomes between rural and urban areas both between states and within states. Whilst some of the differentials, at least in part, can be attributed to region-specific social norms, e.g. beliefs, perceptions and attitudes, there are clear indications that states’ health, social, and economic policies may be playing a significant role. For example, adopting public health policies that are focused on health promotion, prevention, and greater access to services is likely to lead to much fewer unwanted teenage pregnancies and fewer abortions.

The data does not lend itself for a micro-level analysis, i.e. to explore differential in outcomes between the individuals due to socio-economic status, demographic characteristics, beliefs, attitudes and perceptions, and so on. Nevertheless, the analysis of trends that highlights differences in outcomes between states, as reported in this study, can inform the process of policy formation.