Only psychiatry: a strategy void of substantive theory and statistical concepts

Recently, World Health Organisation (WHO) and Centers for Disease Control and Prevention announced that suicide is not a mental health problem (CDC, 2018; WHO, 2014). Despite an urgent need for a holistic approach to suicide prevention, medical modellists still persist with notion that suicide is a mental illness and only psychiatrists are qualified to engage in suicide prevention – see (Shahtahmasebi, 2018).

It is imperative to force the suicide debate back to an understanding of substantive issues as well as methodology and design. With this goal in mind, I have listed in this commentary some of the issues that have hindered progress in development of relevant and appropriate suicide prevention strategies. In addition, the next article in this issue is a republication of paper I of our series on dealing with statistical issues. Papers II and III will be published in Issues 3 and 4.

In addition to feedback effect, clinical bias, suicide data, accountability, highlighted in the Editorial, there are several important issues to note, some of which are open to misinterpretation and misuse. Here are some of them:

Prevention vs intervention: suicide prevention means developing strategies that remove suicide as an option or a solution to a problem, e.g. see the grassroots approach (Shahtahmasebi, 2013), whilst intervention is acting on presentation of predefined symptoms. Intervention is not a suitable strategy to reduce suicide numbers as the majority of suicide cases succeed in their first attempt.

Bias in research data: ‘death’ is not a repeatable outcome and occurs once, therefore the main informants are not available to provide insight into their decision to take their own life. The public mindset is entrenched with decades of promoting mental illness/depression as cause of suicide in such a way that depression or mental illness is assumed in a suicide case after the event. Therefore, information about a suicide case sought from third parties (family/relatives or friends) will be contaminated and biased.

A Reductionist approach is inappropriate for suicide prevention see Figure 1. Often the suicide population is studied as a smaller group/category per chance that an additional insight may be gained. Studying each group in isolation such as those with bipolar, with skin disease, with an adverse life event, age, sex, employment status and career, health conditions (physical ill health/disability, mental illness), etc will lead to erroneous results and misleading conclusions. Suicide occurs in each of these categories but it does not mean that belonging to any of these categories causes suicide.

A Cyclic pattern: the reason why suicide may be higher in some groups, e.g. those with bipolar, in violent relationships, with financial problems, unemployed, is due to the lagging effect in suicide trends (Shahtahmasebi, 2013, 2018), Figure 1. Suicide rates by sub-groups follow the same cyclic pattern as the overall suicide trend – not all cycles start and complete at the same time or have the same duration, i.e. some groups’ rise may coincide with downturn in other groups. Thus, every few years the rise in a particular group (e.g. farmers, students, middle aged men) becomes the focus of suicide prevention and media reporting. This artefact of suicide trends has in fact been used as a diversion to maintain the very strong medical modellists’ stranglehold on suicide prevention policy.

Wrong indicators: unwisely a reductionist approach promotes failed suicide as one of the identifying symptoms for intervention! Failed suicides are the result of failing to prevent suicide in the first place and mean that the medical model of suicide prevention fails to prevent suicide multiple times. The reason for this failure is that suicide attempt cases are required to be assessed  by a psychiatrist before discharge from hospital and the common mistake is that psychiatrists look for symptoms of mental illness and often there are none and so the case is discharged. The case is thus given another opportunity to make a repeat suicide attempt.

Refocus: what we should concentrate on is to investigate why does suicide occur, e.g. if we believe that adverse outcomes such as unemployment, mental illness, and bereavement cause suicide, then what is the reason for healthy people in employment and with no adverse life events who commit suicide?

Figure 1- an example of cyclic pattern in different groups 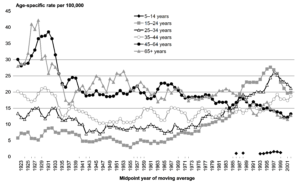 Shahtahmasebi, S. (2018). What does a statistician know about suicide and suicide prevention? Dynamics of Human Behaviour (DHH), 5(1), https://journalofhealth.co.nz/?page_id=1512.