Background: TMS is effective in the treatment of major depressive disorder (MDD) in placebo-controlled trials and naturalistic out-patient studies. In Australia, TMS receives no rebate (currently), thus, privately insured patients generally receive this treatment as inpatients. Aim: A naturalistic study of the effects of TMS on depressive episodes of MDD in private hospital inpatients, to determine whether TMS is effective in severe depression, and whether age or gender impact on outcome. Method: Pre- and post-treatment HAMD6, visual analogue scale (VAS6) for depression, and CGI-S. In addition, a mid-treatment VAS6. Patients were grouped according to HAMD6 severity (mild, moderate, severe). Treatment: daily, 10 Hz, 4 second trains, a total of 75 trains at 110% resting motor threshold applied to the LDLFC. A course of treatment – 20 daily sessions over 26 days. Repeated measures ANCOVA were used to understand the impact of time, gender and age on depression levels.

Results: 52 patients with MDD participated – 35% had previously received TMS. Overall, 69% achieved remission – including 63.2% (12/19) of those with severe depression. Neither age nor gender impacted on outcome. Conclusion: A naturalistic inpatient study of TMS treatment of MDD produced remission in 69% of 52 patients – including 63.2% (12/19) with severe depression. As 35% of patients had received TMS previously, the results were better than might otherwise be expected. Neither age nor gender impacted on outcome.

Major depressive disorder (MDD) is common, painful and difficult to treat. One third of patients do not respond to the first antidepressant administered (1), and one third do not benefit from adequate trials of known antidepressant medication (2,3).

Transcranial magnetic stimulation (TMS) is effective in treatment resistant MDD, as demonstrated in randomized placebo-controlled trials (4,5) and confirmed by meta-analyses (6,7). It is recommended as a treatment for MDD in the guidelines of many professional bodies (8,9).

In Australia, there is currently no reimbursement for TMS treatment. Thus, in private practice, unless there is a benefactor (as in the Galletly et al (12) study), insured patients must deteriorate to the point of requiring hospitalization, so that the cost of treatment can be recovered from the hospitalization rebate. Saint Helen’s Private Hospital (Hobart, Australia) has been providing TMS treatment since 2004, and routinely collects clinical data using standardized instruments.

Some reports indicate younger people have a better response (14), but, others find age has no influence (13, 15). The impact of gender on outcome remains unexplored (16).

A few comparisons of ECT and TMS have indicated ECT has a stronger antidepressant effect (17). This has led to uncertainty about the efficacy of TMS in severe MDD.

The aim of this study was to determine whether TMS is useful in the treatment of MDD suffered by private psychiatric hospital inpatients. We determined the effect of TMS on the total MDD population, and on sub-populations of mild, moderate and severe depression. We also examined whether age or gender impact on outcome.

The protocol and conduct of the study, and the publication of this report was sanctioned by the institutional ethics committee.

The study conducted through 2017.

Subjects were inpatients at a private psychiatric hospital, all suffering MDD and receiving antidepressant medication. All to have failed to respond to at least two courses of different antidepressants at appropriate doses administered for appropriate periods (thus, qualifying as treatment resistant MDD, or TRD (3)). Exclusion criteria: a history of epilepsy or currently pregnant, metal objects in the head or pacemaker in the chest, currently abusing or withdrawing from substances.

Treatment: Stimulation was provided by a MagPro device with a MagVenture Cool-B65 coil. Daily – 10 Hz, 4 second trains, 26 second inter-train interval, a total of 75 trains, at 110% resting motor threshold, applied 6 cm anterior to the site of the resting motor threshold on the left side. A course of treatment was 20 daily sessions over 26 days, with a 2-day rest period after each 5 treatments.

Routinely applied metrics: before and on completion of treatment: 1) the six-item Hamilton Depression Rating Scale (HAMD6) (18), 2) a six-item visual analogue scale (VAS6) (19), and 3) the Clinical Global Impression of Severity (CGI-S) (20). In addition, mid-way through the course (after 10 treatments) a further VAS6 was administered.

The subjective VAS6 was designed to complement the objective HAMD6. Accordingly, the anchor points at either end of 10 cm lines: No depression – Worst possible depression; Activities give normal pleasure – Activities give no pleasure; No physical health concerns – Extreme health concerns; No feelings of guilt – Extreme feelings of guilt; and Not anxious – Most anxious possible. The 6th HAMD6 item concerns ‘retardation’ – in an inexact match we chose VAS6 anchor points: No concentration problems – Most possible concentrations possible.

Descriptive statistics were used to describe participants and the number of participants at the different depression severity levels before and after treatment. Repeated measures ANCOVA was used with time as the repeated measure, gender as the between subject factor, covaried for age to understand if there were significant changes in symptoms with time, between gender and whether age was associated with symptom change. We also explored whether prior treatment (ECT or TMS) was associated with symptom change.

Over the year of the study, a total of 52 individuals completed a course of treatment, and 6 experienced relapse and completed a second course – for a total of 58 courses of treatment. Only the first courses of treatment were used in the following analyses. Table 1 shows the demographic characteristics of the participants. On average, the participants had over 18 years of psychiatric history, were taking over 2 types of psychotropic medications, 31% had previously received electroconvulsive treatment and 35% had previously received TMS treatment (but not in the preceding 6 months).

Indexes for Areas (SEIFA) Disadvantage Index corresponding to the participant’s postcode of residence (Australian Bureau of Statistics, 2013). The SEIFA of participants was slightly below the Australian average (M=1000, SD=100), t(51)=-2.34, p=0.02. 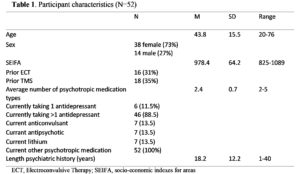 Repeated measures ANCOVA with Time as the repeated measure and gender as the independent variable covaried for age showed a significant reduction in HAMD6 and CGI Total scores post treatment (see Table 2). There was no main effect of gender on HAMD6 or CGI scores, age was not a significant factor in the analyses, indicating neither age nor gender impacted on outcomes of depression from the acute TMS sessions. The analyses were re-run to explore any effects of prior ECT or TMS treatment. There were no significant main effects of these prior treatments on the HAMD6 or CGI over time.

Table 3. Number of participants in each HAMD6 range before and after treatment

We chose the HAMD6 as it is preferred to the HAMD17 in terms of transferability, scalability and responsiveness (26,27,2); it is unidimensional (29,30,31) and is brief enough to be easily managed in a busy service clinic.

Our results (69% of MDD patients achieving remission) are (as expected) superior to those of controlled trials (4,5). Our patients were taking a range of antidepressants while those in controlled trials are medication free – evidence indicates different treatments may act synergistically (32). Our study provided what treating staff believed to be state of the art treatment; this would have been conveyed to patients, thus the placebo effect would be heightened. Slight treatment parameter differences between our study and the cited controlled trials may possibly (unlikely) have influenced the outcome. As mentioned, in Australia at the moment, the cost of TMS is not covered by the government or private insurers, so that in private practice, patients must be admitted to hospital to allow this cost to be recovered from the hospitalization rebate. Thus, when these people received TMS treatment for MDD, they were inpatients, which would also have contributed to their recovery. Finally, 35% had received TMS previously, and if TMS produces a beneficial effect at first treatment, it will do so at subsequent treatments. Thus, this 35% of patients were very likely to achieve substantial benefit.

Our results were also (as expected) superior to the 28% remission of the naturalistic outpatient study of Galletly et al (12). Due to commercial circumstances, we provided inpatient care – thus, for our patients, the stressors of everyday life were replaced by support and encouragement from trained clinical staff.

This was the first study (to our knowledge) to examine the effect of TMS on various levels of depression. For moderate and mild depression, remission was achieved in 75% of cases. In severe depression, remission was achieved in 63.2% of cases. This is important new information – that TMS is indicated in not only in mild and moderate, but also in severe MDD. Again, that 35% of our patients had previous experience of TMS is a complication.

Neither age nor gender impacted on outcome. The absence of an influence of age on outcome is consistent with Rostami et al (13). While the numbers in this study were small – 38 females and 20 males – the absence of a significant difference indicates that any actual difference must be minor. There were also no differences in symptom reduction in participants who had or had not had past ECT or TMS treatment, suggesting outcomes from acute TMS are not influenced by these prior treatments.

We used two objective metrics (HAMD6 and CGI) and the results were in agreement. We also used a subjective measure (VAS6). The results of the objective and subjective were also in agreement, which gives confidence in the findings. The graph of the VAS6 results [Figure 1] indicates an orderly decline in subjective depression. This is as anticipated, but has not been previously demonstrated (to our knowledge). We believe the VAS6 considered in this manner can illustrate/demonstrate the placebo response. Occasionally, a patient is encountered who manifests dramatic early improvement, which is lost by the 20th treatment – the VAS6 at three points in time can usefully quantify the good improvement midway through treatment which is lost by the end of treatment. 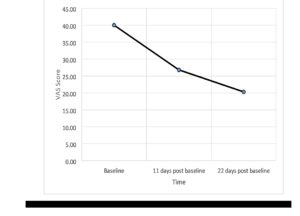 In current clinical practice, all patients who come to TMS have failed at least one or two trials of antidepressants, and satisfy the criteria for TRD. Thus, all of the patients in this study presented difficult clinical challenges, not simply those who, on this occasion, had a HDRS6 score in the severe range. The overall remission rate of 69% (albeit assisted by hospital admission, and that 35% of patients were known TSM responders) indicates TMS is a highly effective therapy by current standards.

TMS is effective in mild, moderate and severe depression. It should be available to inpatients and out patients in private and public settings.

Funding: This research did not receive any specific grant from funding agencies in the public, commercial or not-for-profit sectors.